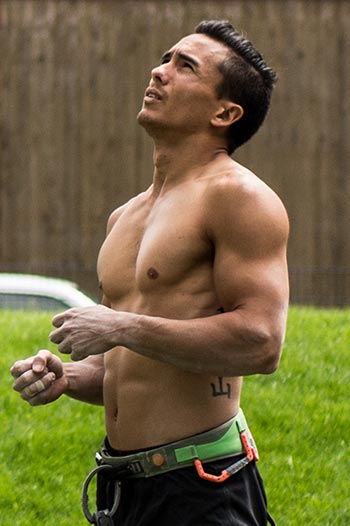 Hi Guys my name is Sean McColl, I‘m a professional climber from Canada.

I came to Germany for the Munich World Cup. It was kind of midway through August and my goal was to train in Germany or maybe Austria up until the World Championships which take place September 6th to 16th.

Daniel: You are in Germany for quite a while know, what does your calendar look like ,and how do you spend your time in between the competitions?

Sean: Well yeah, I have been here for a while, it‘s close to three or four weeks. And I definitely will be able to come back. It‘s a lot of testing, where we can do training camps for you know one week, two weeks obviously three weeks.

There´s a few boulder worlds (Boulderwelten) and then there‘s also the DAV Kletterzentrum where I can do Lead and Speed. So that will be the last I guess kind of 2 training days. Then I do a taper, kind of normal for athletes, the week leading up to the World Championships.

Daniel: Now you are here in Augsburg. How did you notice the Gym, where did you here about it and what are you here for?

Sean: Well my first instincts were to go from the World Cup in Munich and probably drive south to Innsbruck because they obviously have the Kletterzentrum Innsbruck, where they have Lead, Speed and Boulder. But with the closures for the World Cup and then the Austrian team and federation that have the option to close the gym from 9 to 3, on actually every day until the World Championships, I thought it would be too much of a zoo.

And so I asked a few people where I can train Lead and Speed, and a couple of people said oh well there‘s a new training centre in Augsburg, that they‘re actually going to do a training camp just after Munich. I decided to not really avoid the training camp, but I figured it might be a little bit invasive, you know the German team kind of wants to do their own thing. So I went to studio bloc first and then came here right after. And now I‘m training lead and speed this trip but I look at the bouldering and I could train it as well. But these four days are very specific towards lead and speed!

Daniel: Do you need to train the most in those two disciplines and do you follow a strict plan?

Sean: It‘s not that I have to train the most in either one of them. I just think right before World Championships you should do a little bit of everything, so that it doesn‘t feel uncomfortable when it‘s going to the comp day.

I follow a very strict plan, but at the same time if it‘s not working, or if it says to train five hours and I‘m really wrecked after three and a half, there‘s no way I continue one and a half hours with the risk of hurting myself, [...]. So it‘s a lot by feel, but I have a really good idea of exactly what I want to do during these days.

Daniel: Do you have a coach that travels with you?

Sean: I don‘t have a climbing coach but I do have a sports team that follows me

And so a sports physiologist does put in my trainings, but he‘s not a climber and it‘s quite important to know that he‘s not a climber, because he‘s looking at it from a purely sports perspective of training loads, when I‘m going to be recovering and what to do during my recovery days. And then from my years and years of training and climbing and picking apart other people‘s training, I put together the actual climbing part and then I tell them how many hours per week I‘m going to do certain trainings and he puts it all into a calendar. Then there‘s part of the feedback loop that I tell him every day. How I feel, what I did so that he continued to adapt it as the year progresses.

Daniel: Now that you already trained two day in Augsburg, what are your impressions about the Gym? Is it well suited for training towards such big comps as the World Championship in Innsbruc

Sean: My first impressions which kind of fall actually with my overall impressions, are that I‘m really impressed with this facility, similar to how actually impressed I was with the Innsbruck facility when I first went up there. I think Innsbruck is bigger, but when you take your big lead wall and your two speed walls and all the bouldering outside I think of it directly as like a gym that‘s basically in top ten in the worlld, somewhere where I could run a training camp. I‘ll definitely be coming back to Augsburg in order to train for maybe next year or whenever it is. But now it‘ll be a little pin on my map, so maybe when other gyms are too busy I know I can come here. It‘s comfortable. It‘s new. And the last part is definitely routesetting.
I think the setting was really good. I know that they did just set for a competition circuit so it‘s maybe even a little bit special. I think I‘ll do 28 different routes kind of just over the nine grade mostly in the tens. And it works really well.

Daniel: What is your plan after Innsbruck, will you go rockclimbing outside?

Sean  The season just after Innsbruck World Championships doesn‘t quite end. It actually doesn‘t stop at all for me. A week later is the Adidas ROCK STARS up in Stuttgart. I work really well with Adidas so I‘ll go up there and I‘ll compete as well and hopefully be in finals this year. And then one week after that is the lead World Cup in Kranj. And so I do three in a row, even after the World Championships.

But I won‘t be as focused as I am now for the World Championships but I still have a lot of fun. They are one of my two favourite comps of the year the ADIDAS Rockstars and the Kranj World Cup.

And after the Kranj World Cup I have the option of basically ending the season, or maybe staying in the season and doing the two World Cups in Asia, the China Open or maybe there‘s rumors of the Pan American championships, but it hasn‘t been approved.

So there might be a few other comps that I could do, or I could stop the season and then climb outdoors, kind of as a as a break from my training.

Daniel: Do you climb outdoors a lot?

Sean: I actually love to climb outdoors. And it‘s a conscious sacrifice that I don‘t climb outside more in order to be better in competitions, because I know that there is an inverse effect of the more you climb outside the less strong you are in competitions, especially before and leading up during the strength phase

Daniel: Is it so different?

Sean: Nowadays It actually is just very much different. Yet even more so I would say with bouldering than with lead. [...] A lot of bouldering is not only just strength now, it‘s a lot of strength or slabs and a lot of little tricks and you have to learn the tricks and you don‘t really use any of those tricks outside. So it‘s a little bit comical, but that‘s just the way the competition is and it‘s still kind of bouldering. 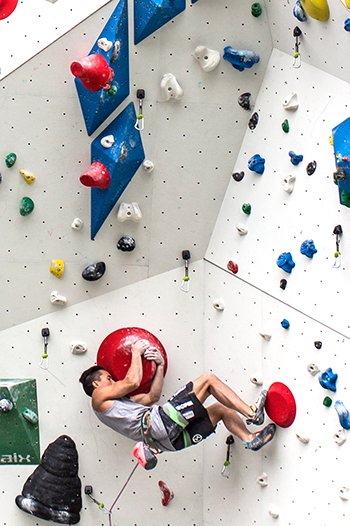 Daniel: Do you have a favourite outdoor climbing area in Europe?

Sean: Not really a favourite. There are some that I go back to. Mostly just because I like the scenery, but that will be something that I‘ll go more into kind of as I‘m ending my competition career and I can actually dedicate a lot more time climbing outside.

Daniel: Now with that being said, do you look forward to the end of the season so you can dedicate more time into climbing outdoors
or is it like a love-hate thing?

Sean: It is definitely a love love thing. Because I really just wish I had more time in the season. If the season was five or six months, I could go and dedicate easily four or five of those months to climbing the outside. Unfortunately my offseason is about one month, two months maximum. And so I usually take about one of those months to like not climb at all, or not train. And then the other month usually I do want to go climbing outside. It‘s kind of like a mix between a vacation and an offseason, because I‘m not training but I kind of just want to climb outside. But it‘s also again, when I‘m done with the competing part of my career, I´ll invest all the time I‘m spending now on training and competing, into climbing outside and it‘ll be just like a new adventure.

Daniel: My last question is, do you have a favourite bavarian/german food?

Sean: My favourite food, which I had once when I was here was a Schnitzel, just standard pork schnitzel with like a really nice cheese sauce and although I‘m supposed to be kind of on a strict diet it‘s really nice to have a few things. And I‘m really into food and specialty foods, so it was really nice to have that…. Kind of like a cheat day, and I think you can have a cheat day once a weak even. 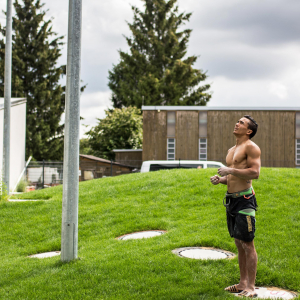 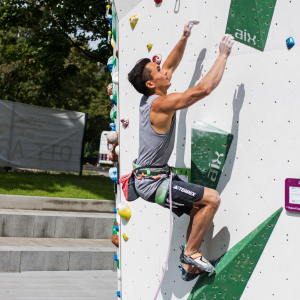 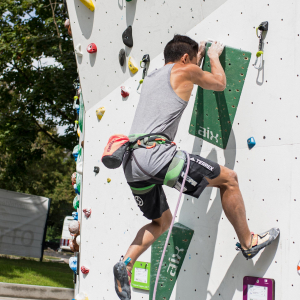 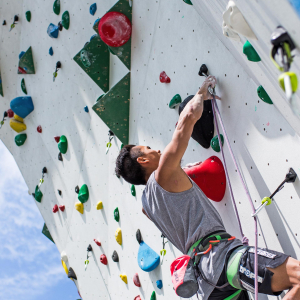 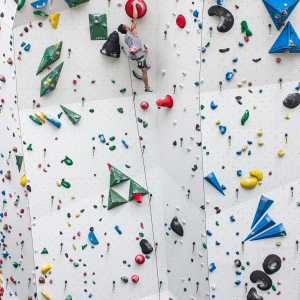 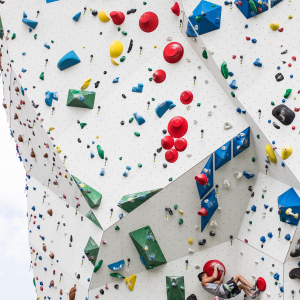 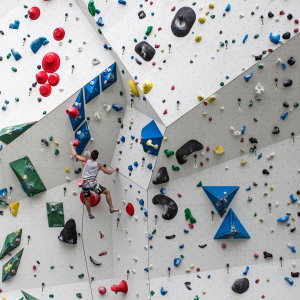 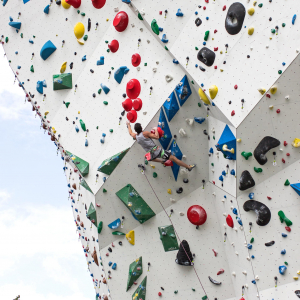 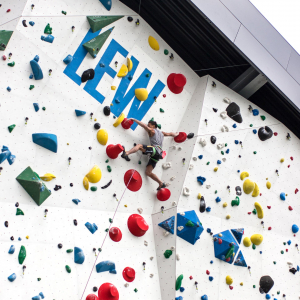 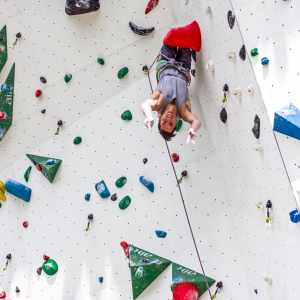 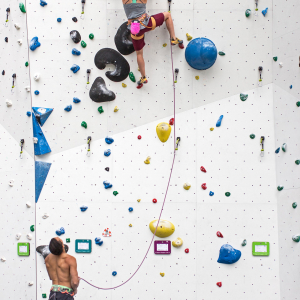 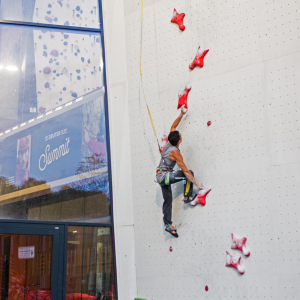